From the FRONT PAGE of the SINGAPORE STRAITS TIMES NEWSPAPER, May 2, 2002. 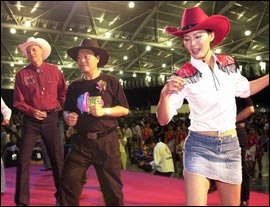 SINGAPORE -- Singapore on Wednesday mustered nearly 12,000 cowboys and cowgirls to break a world record for line dancing established by Australia two years ago, officials said.
An audit by PricewaterhouseCoopers showed that 11,967 people packed the dance floor at an indoor exhibition centre to set the record for the most number of participants in a line dance.

The old record was 6,275 people set by Australia in 2000. The results will be presented to officials of the Guinness Book of World Records for inclusion in the book, organisers said.

Young and elderly Singaporeans, many of them garbed in jeans, cowboy hats, handkerchiefs and leather boots, danced for seven minutes to the music of 'Singapore Swing', choreographed by a popular British [Columbian] line dance instructor, Bill Bader.

Organisers said they had worked for eight months to perfect the feat.
'For a small country with only 3.2 million people, this is indeed an accomplishment,' said an elderly ethnic-Chinese man who joined the record-breaking dance.

Line dancing has gained wide popularity in the wealthy city-state, where the National Trades Union Congress (NTUC) is promoting it as a health activity. Weekend line dances are held in parks and in shopping malls and the dance is taught at community centres.

'It is a great way for people of all ages to exercise and have fun. We want to promote this healthy lifestyle and give our local line dance scene a further boost,' NTUC said in a statement. -- AFP
_______________

Other world media covered the event with articles which appeared on 2 May 2002. However, the web links are no longer available at ABC News Online and Channel News Asia.

Back to World Records